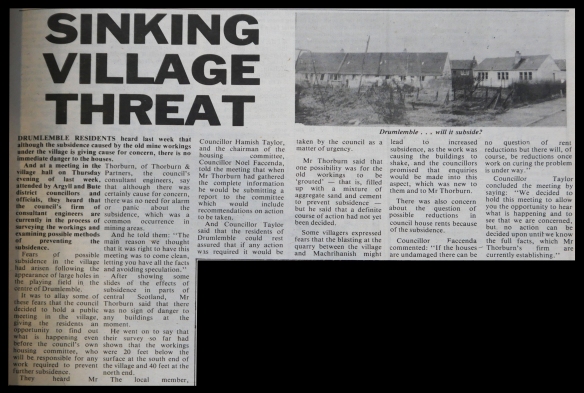 Following on from the article by Elizabeth McTaggart about the Drumlemble Diaspora  here is an extract from a conversation I had with someone who was involved in the excavations.

“I was involved in the NCB (National Coal Board) investigation of the old mine workings at Coalhill, Drumlemble, in I think it was in the early eighties.

“I was employed at that time with McFadyen’s Contractors, and was tasked with excavating an area of ground in the gardens of number 19 Rhudal Cottages, and 30 Rhudal Cottages. Mr and Mrs Beattie (nee Flo Brown) lived at number 19, and Flo’s mother Mrs Mary Brown occupied number 30. So, mother and daughter lived directly across from each other.

“Two representatives from the NCB were present and explained to me what the excavation entailed: I was to dig down until I hit rock, which they expected to be fairly deep below the surface.

“I started digging roughly midway between the two houses, and there was a huge heap of spoil by the time I actually reached the predicted rock. At one point, I was beginning to doubt whether or not I would have enough reach with the digger to actually hit rock. It was eventually exposed, and after a good deal of measuring the depth, it was located. The men from the NCB had maps and documents that they were checking and, after some deliberation, I was instructed to burst a hole through the rock, as they were certain that the area I had exposed was the roof of one of the old mines said to be in that area; so off with the digging bucket, and on with the rock breaking attachment. The first few thumps from that brought Mrs. Brown running from her home in fright! She said the banging from the breaker made her house shake, and she was scared it would fall around her. After some banging away at the rock, I managed to break through. The hole was made large enough for one of the men to go down into with, if I remember correctly, a ladder. I had lowered him into the excavation with the digger. He took some photographs down there, and said that it was indeed an old mine working. It wasn’t all that deep or wide, and the direction it seemed to go in was roughly between 22 and 23 Rhudal Cottages, and across the road and under 8 or maybe 9 Rhudal Cottages.

“The hole in the roof of the shaft was covered over, and the entire area was filled and levelled. In a matter of weeks there was very little sign that anything had been done there”.