Following on from the article written by Alex McKinven about miners and football in South Kintyre we’d like to share a photo, courtesy of Drumlemble born man, Willie McMillan. Alex describes Drumlemble as “a hot bed of mining and football”. This photo portrays the 1919 -1920 Drumlemble Football Club who were winners of the Charity Cup that year.

I was given the following information by Maggie Allen, daughter of Argyll Colliery on-cost worker, Coventry Paton. It was written by Maggie’s brother, Archie Paton.

Hi – My name is Archie Paton. My father, Coventry Paton, worked at Argyll Colliery but left Campbeltown with his wife, Anne Jane McArthur, and their two young children, to work in mines around Wakefield, West Yorkshire. They had three more children. I was born in 1957 and followed my father into mining and enjoyed a good few years in the job with him. Mum and Dad retired back to Campbeltown where my sister Maggie married a local man, Dave Allen. My parents enjoyed their retirement there.

“Sadly my brother, Archie,  passed away last year. Father and son are back together again in the Miners’ Memorial Garden in Wakefield – once a miner, always a miner. Hardy men at rest”. 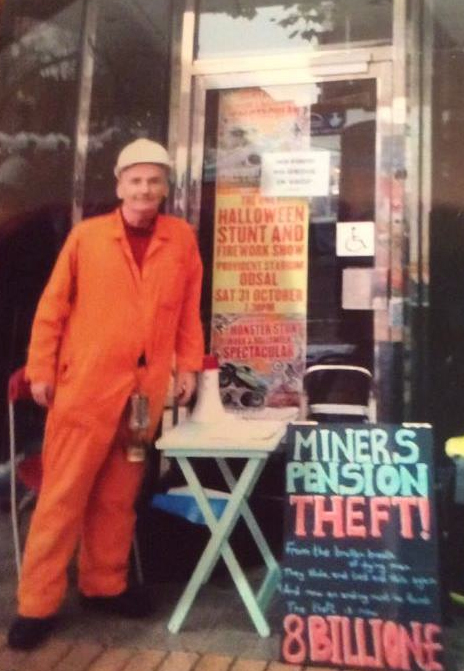 After working at Wakefied with his father, Archie went on to work at the New Selby coalfield at Wistow Mine and then at Whitemoor Mine. Archie died on the 11th Sept 2016. He was well loved and known in mining circles as a passionate campaigner for miners’ welfare and rights. Archie was a keen follower of  the TRTD Facebook page and his contributions will be missed.

These announcements from Campbeltown Courier, which date back to 19th of March 1953, give us an insight into the important role that Argyll Colliery, Machrihanish, once played in everyday Campbeltown life. Miners contributed hugely to the community in the 1950’s and 1960’s and here we see how they organised children’s Gala Days each year for not just miners’ but for all local children. Dances were held at the Miners’ Welfare Hall in Bolgam Street (formerly the Old Courthouse), at the Victoria Hall, The White Hart Hotel and the Templar Hall.  Football matches, like this one, where the Argyll Colliery team played against Shotts Bon Accord, Lanarkshire, were used as opportunities to raise funds for local good causes, in this instance for the Cottage Hospital  TV Scheme. Football was an integral part of miners’ leisure time, whether as a spectator or as a player. 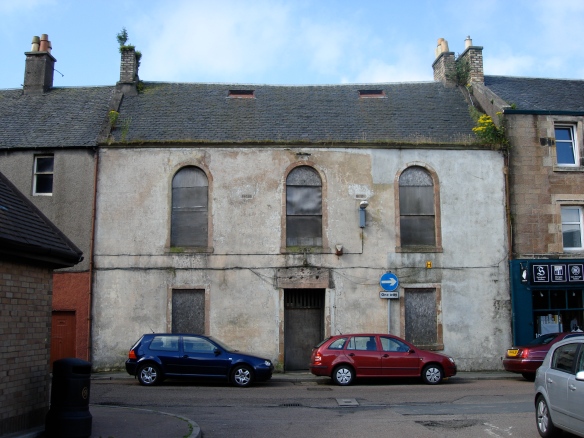 J.K.B. McMillan, known as Kenny, was born in 1926 in Campbeltown and as a young man was called up for the the army and served with the Royal Engineers. His first job after serving in the army was at the Argyll Colliery. In 1948 he went to be trained in Doncaster and returned to work at Argyll Colliery for the next 20 years, until the pit closure in 1967. In 1950 he married Agnes Girvan, whose father was one of the hall-keepers of the Miners’ Welfare in Bolgam Street, Campbeltown. They had five children and their lives were consumed by the various activities organised by the wider mining community.

Mum, Agnes, was the prompter for the successful miners’ drama group and Dad, Kenny, played and later managed the football teams. The miners’ football team was formed in July 1951 and according to records kept by my father, they were a fairly successful team playing in the Scottish Junior Cup. Dad was a Motherwill supporter which is why the Argyll Colliery Team played in “Amber and Claret”. Argyll Colliery F.C. This photo was first published in Coal Magazine and was taken at the back of the Miners’ Welfare Hall in Campbeltown. This is where the team held their tactical meetings. Kenny is pictured here at the far right. Photo Courtesy of  Morag McLean (Nee McMillan).

Kenny became the union steward for the NUM (National Union of Mineworkers) and was very involved in settling disputes and ensuring his colleagues were treated fairly. He eventually went on to serve as a local Labour councillor in South Kintyre. 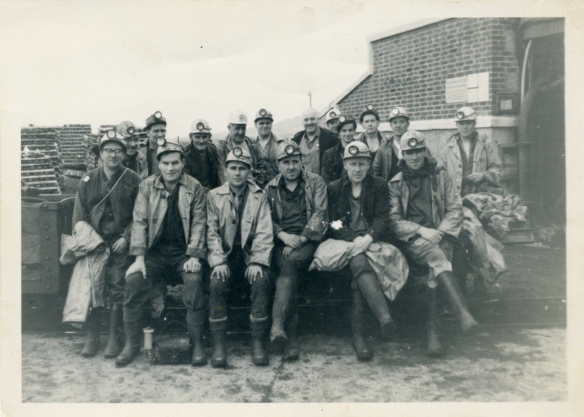 Leaver’s certificate from 1966, which belonged to the late Kenny McMillan. Courtesy of Morag McLean (nee McMillan).

Unfortunately in the latter stages of the pit before its closure  he was unwell and died in 1970 of kidney disease. He left behind a number of diaries which sometimes detailed the dangers the miners encountered in their daily lives. That said, Kenny enjoyed the camaraderie of his colleagues and the everyday challenges.

Here are some excerpts  from Kenny’s diary which relate to the time running up to the closure of Argyll Colliery:

Given one month’s notice

Discussed cases with manager and arranged the withdrawal of welfare fund

Drawing girders in the mine.

and going back to the fire of at Argyll Colliery 1958:

Production was halted because of the fire for nine weeks and T McFarlane was gassed.

We are currently trying to identify the men in this photo so will update this caption when we have some verification… Photo courtesy of Morag McLean (Nee McMillan). 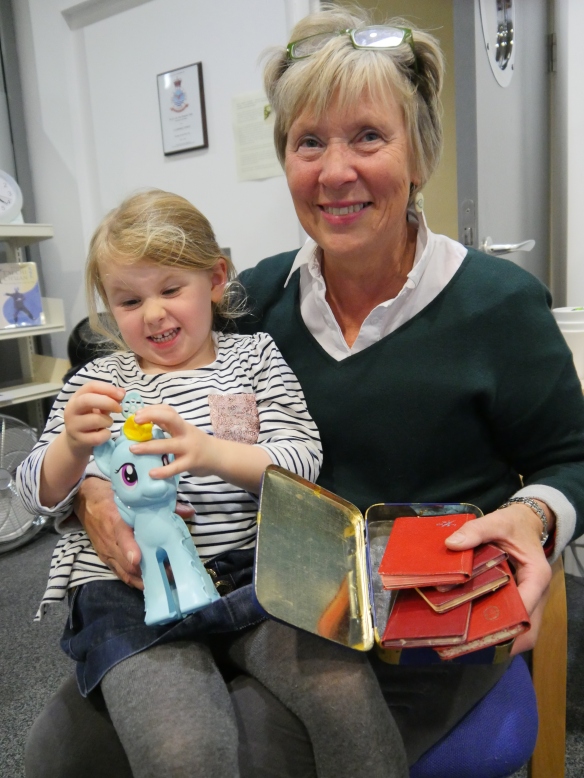 Thanks to curator at Campbeltown Museum, Elaine McChesney, for the photograph below. The ticket was given to the Museum by Donald Irwin of Drumlemble. This would have been one of many social events organised by the Miners’ Social Club in Campbeltown. The Club was situated in Bolgam Street, in what was originally the Court House, which is thought to be one of the oldest buildings in Campbeltown. The White Hart Hotel is situated on the corner of Main Street and Argyll Street. I’d  be interested to hear more about these supper dances and am wondering what “Informal Dress” would have looked like in 1949! If you have any information please contact me here.

The Old Courthouse, Campbeltown, was used as the Miners’ Welfare Hall and served the employees of Argyll Colliery, Machrihanish. This photo was taken in 2007. Photo: Jan Nimmo © 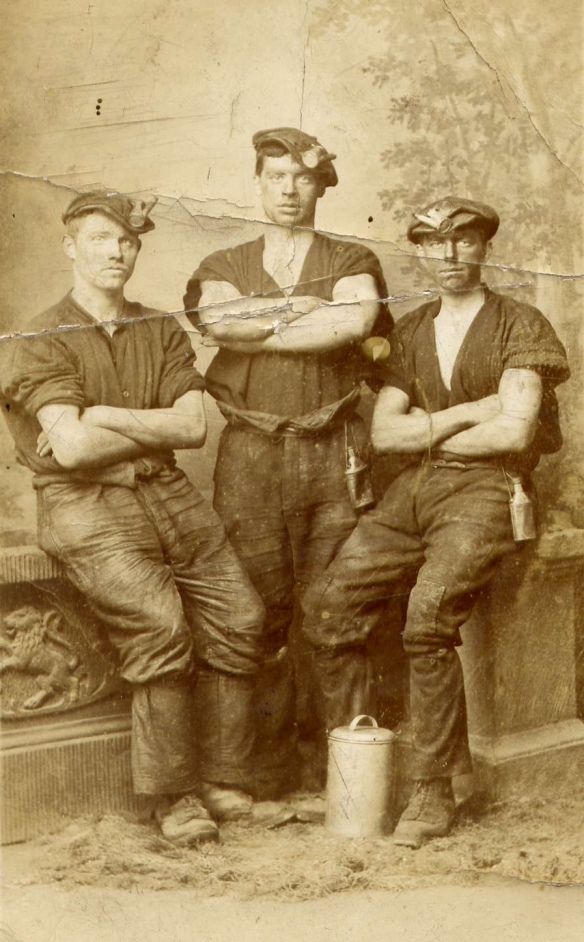 I am at present engaged in a project which involves going through the Old Parish Registers for Campbeltown entry by entry.  The specification of occupations began in these records in 1802, and it seems a worthwhile exercise to note all those births/baptisms which mention the colliery then at Drumlemble.  Not all mine-workers are identified as such, but most are, and from these records it will be possible to form an idea of the families at Drumlemble and nearby Coalhill which were involved in the industry.

Coalhill, which was a settlement up the brae from the present village of Drumlemble, at about NR 662 192, is hardly mentioned in these records, but I suspect that many, if not most, of the entries relate to Coalhill.  Certainly, in the ‘List of Inhabitants upon the Duke of Argyle’s Property in Kintyre’ of 1792, Coalhill is the larger community, with 144 occupants, against 86 in Drumlemble, with a number of these latter employed and living on the farm there.

In the late 18th and early 19th century, Drumlemble/Coalhill, with its coal mine, was the largest settlement in Campbeltown Parish outwith the town itself and its satellite villages, Dalintober, Lochend and Dalaruan.  The village now known as Machrihanish was, in the early 19th century, a small fishing community, variously known as ‘Mary Pans’, ‘Salt Pans’ or simply ‘Pans’, and Stewarton did not come into existence until about 1804 and did not expand significantly until the 20th century.

The project will end with the year 1854, after which the recording of births and marriages – and additionally deaths – was taken out of the hands of the churches and became the responsibility of parish registrars. This list will be supplemented periodically as I work my way through the registers.  Spellings are – or should be – as written in the records.

Maggie Allan brought this photo from her late father’s collection along to our first drop-in session at Campbeltown Library. Her father was Coventry Paton (Top, second left).  Alex McKinven (author of Kit and Caboodle: The Story of Football in Campbeltown) kindly gave us information about the team in this photo. This is the Argyll Colliery team c. 1952 /53. The colours the team played in were Claret and Amber (Motherwell colours).