My Dad, Archie McGeachy, was born on 11th September 1924. As we grew up, Dad often spoke in detail about his times at the coal mine in Machrihanish and of the camaraderie between the men. He worked as a shot firer.

There were mine shafts which extended to the Aros Farm, north of Machrihanish, and out under the sea. I recall there was actually flooding in the mine before the fires [and total extraction] eventually closed it down.

One of the things I remember is my Mum and aunts talking about the time a Clydesdale horse was turned out into the field, above Coalhill, between there and Trochoillean Farm. In the morning it had fallen down a hole which appeared in the field. The horse was called Jacopa (I hope that is the correct spelling of its name). It was a sore loss to the farmer concerned.

In the heavy snowfall of February 1963 my Dad and I got stranded at Westport cottage and spent from the Tuesday till the Friday with a retired teacher, Miss McDougall, and her brother. There was quite a number of us including two policemen who divided all of us into two groups and the remainder went to Low Balevain Farm to enjoy the hospitality of the Binnie family. Drifts were above the Telegraph poles but Mr Binnie walked through the snow every day bringing baking, milk and potatoes to help feed us. We had the Jacobs Biscuits traveller with us too but his only samples were coconut mallows to help supplement our diet. I have never been able to eat one from that day till this! Hughie Anderson from Machrihanish was stranded as well. He drove the pit lorry and it was loaded with coal. Craig’s coal lorry was stranded likewise. Miss McDougall’s coal bunker was well filled .

Hughie, Dad and I set off on the Friday and walked the shore line to the Backs Water where we parted company. Dad and I stopped off at West Trodigal farm where Mrs Armour fed us with a bowl of homemade soup. We then stopped off at the miners’ canteen at Argyll Colliery where Dad bought some cigarettes – he hadn’t smoked for days. When we reached home we had to call the police station and let them know that we had made it! The  Campbeltown Courier reported the story. I was the only female stranded but they obviously thought I didn’t merit consideration as they made no mention of that fact. I may add that I was the only person who went back in person to thank Miss McDougall. Dad and I were so grateful and felt we were lucky to be alive as we wouldn’t have stood a chance against the snow.

I remember playing in the houses in Drumlemble that ran along from the hall to where the bus shelter now stands. The roofs were off the houses by then and the windows were covered by corrugated iron. The side row houses’ ruins were really only an outline of where the houses had been, as were the ruins next to Coalhill cottage. On the left hand side down the side row there were a few allotments and some had wee sheds standing on them. 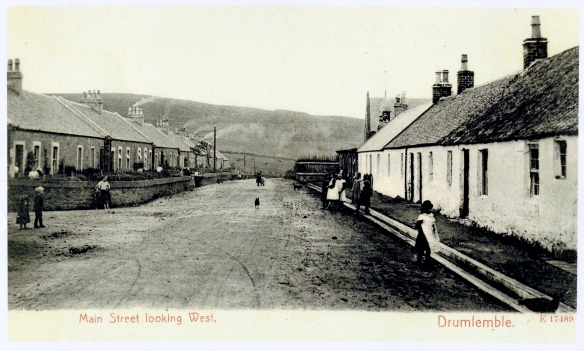 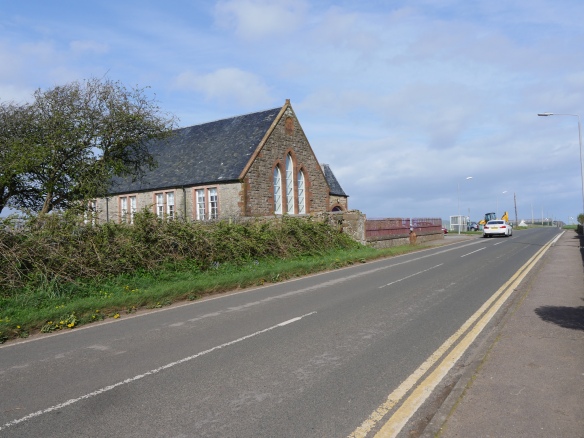 Drumlemble Mission Hall, now a private residence, and where a row of miners’ houses used to stand on the Campbeltown – Machrihanish road. Photo: Jan Nimmo ©

There was a miners’ bus transporting the men from town out to the pit at Machrihanish to suit the shift times. We used to walk from Drumlemble to Campbeltown on a Sunday and catch a lift home with the miners’ bus.

Miners’ gala days and Christmas parties were always so exciting for us as we grew up. The Miners’ Welfare Hall in Bolgam Street in Campbeltown was where the parties were held. The picnics were huge family outings and are well remembered for such happy times.

My Dad developed a lung disorder due to the coal dust and spent a year in the sanatorium in Oban due to that. He was never able to do mine work after that and actually never able to do any manual work. He passed away as a young man aged 43 on 8th January 1968.

In 1982, when part of the playing field collapsed in Drumlemble, the whole of Rhudal cottages were decanted but the four houses in Burnbank were left. We were literally over the fence from this gaping hole. My brother, Leslie, worked with McFadyen Contractors then and he had a Coal Board official on the bucket of his JCB, with arm extended, in the shaft that ran between numbers 19 and 30 Rhudal cottages. I also recall where a mound appeared further along the playing field and the water spouted out of it like a fountain. Many years later the National Coal Board had to backfill underneath the self same Burnbank homes as one of the houses was sinking.

The bard of Kintyre is an ancestor of ours (James McMurchy). Interestingly enough his art has passed down through the generations. I myself have been published on six occasions and have written some lyrics for songs. At present I am working with Charlie McMillan who had written a pipe tune and I have added the words. We are at present in the process of trying to get it recorded to a CD. My brother, Leslie McGeachy, and my sister, Margaret Blaylock, are both prolific in the poetry genre as well. 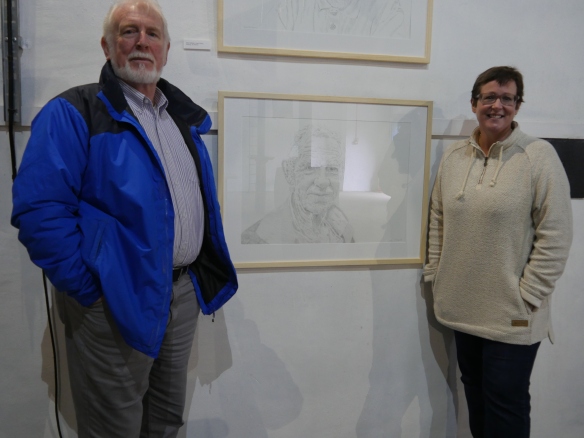 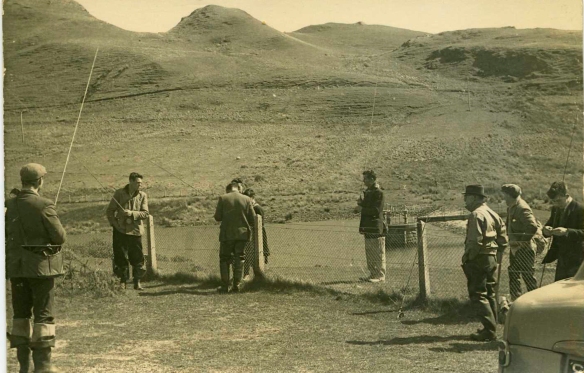 Oor angling lads, they aw’ went fishing
Tae hae their annual competition
Some took hook and bait and line
But Wullie Kinla’ took VP wine
Without delay they set their task
But Wullie lay upon the grass.

He had a swim and then his tea
But aw’ the while he drank VP
As time went by, he heard a shout
When every expert caught a trout
But treated this with sheer contempt
Until his VP wine was spent.

The keenest man was Hugie Lee
Although he’s only five foot three
To get first prize wis his ambition
He spent his whole life at Crosshill fishing
Wi’ expert hand he cast his line
he knew that it was nearly time.

When all at once he got a bite
His reel began to take its flight
Wi’ skill and brawn he fought this bout
No doubt this was the heaviest trout
He’d show them all, he’d stop their bounces
He landed it, it weighed twelve ounces.

Then Wullie staggered tae’ his feet
This canny lot his he’d hae tae to beat
As time was short, he’d really try
And tak’ the auld wife hame a fry
He staggered in and cast in line
Ow’ bleary eyed and foo’ o’ wine.

The trout then queued up for his bait
They knew that he had left it late
He took eight fish and left the rest
The prize was his, he’d done the best
Still Hughie Lee runs round and bounces
I wis only beaten by fifty four ounces!

Many miners who worked at the Argyll Colliery were keen anglers and fished the lochs, reservoirs and burns around South Kintyre; The Lussa, Crosshill Loch, Aucha Lochy, The Backs Water and the Machrihanish Water. Some, according to John McNaughton, a former oncost worker at Argyll Colliery, also did some sea fishing. I imagine that it must have been an enjoyable pastime where miners, who were stuck down the mine all week, were able to enjoy fresh air and relaxation.  The above poem is thought to have been written by Sandy Smith, who worked in the winding house at the Argyll Colliery. Sandy wrote various poems which we hope to be able to publish here on the blog.  This humorous poem was written about an angling competition in 1959 and relates the story of coalface worker, Willie McKinlay, who won the competition that year.

Listen to the late Willie McKinlay read the poem…

You can read another poem by Sandy here.