A presentation/slide show was put together for The Road to Drumleman’s Community Exhibition which took place at Glen Scotia Distillery in April 2017 to commemorate the 50th anniversary of the closure of Argyll Colliery, Machrihanish. The slide show is effectively a digest of what is already here on the archive blog.

The presentation has since been updated and is now available to view online. It will also be possible to view it at Campbeltown Library and at Campbeltown Museum. I may update it from time to time but here is the current version

Please feel free to contact me if you wish to either add something to the slide show or to the archive.

Members of the public, former mine workers and Ewen and Ian from Machrihanish Holiday Park, Machrihanish on 2nd Sept 2017, 50 years after the closure of Argyll Colliery. The banner was made by 3rd year art pupils from Campbeltown Grammar School. Photo Mark Davey ©

On the 2nd of September the current phase of The Road to Drumlemen project came to a close with an event at Machrihanish. Members of the public visited the former site of Argyll Colliery, now the Machrihanish Holiday Park, to hear former mine employees explain what used to be on the site. We are very grateful to Ewen and Ian of Machrihanish Holiday Park for allowing us to visit the site. Those attending met with others afterwards in Machrihanish Village Hall for refreshments and then watched the documentary film about Argyll Colliery, The Road to Drumleman, and this was followed with an opportunity to share stories from back in the days when the coal mine was functioning. It was a lovely evening, and at times quite an emotional one. 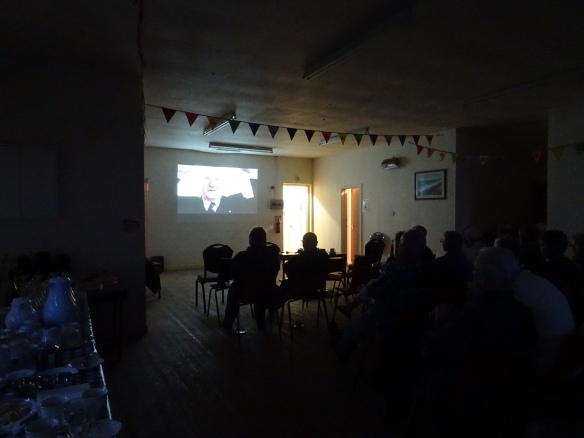 We’d like to thank the funders, all those who hosted us, who participated in the sessions and who volunteered throughout the project. Whilst this marks the end of the current phase of the project Jan Nimmo will be continuing to update the archive blog so feel free to contact her with your stories and images. 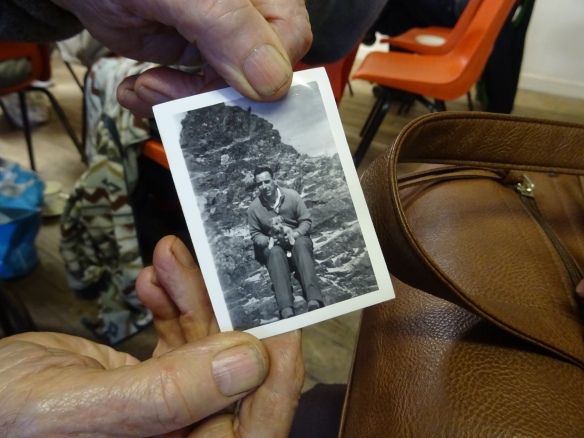 Photograph of the late Willie McKinven brought to the event by his widow, Jenny McKinven. Photo: Jan Nimmo 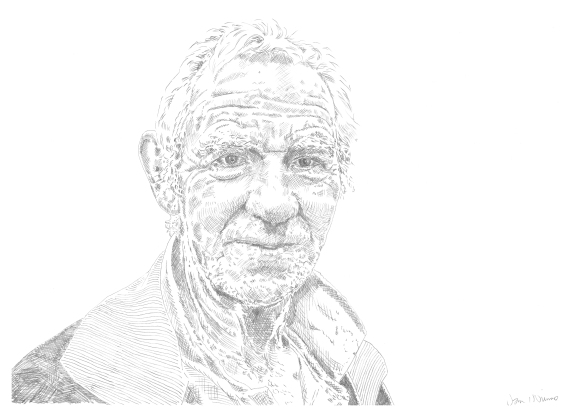 Following on from the making of her documentary film, The Road to Drumleman, about Argyll Colliery, Machrihanish, 1947-1967, Campbeltown born artist, Jan Nimmo decided to continue working on gathering images and stories related to Kintyre’s mining past. For the TRTD community exhibition that was held at Glen Scotia Distillery, Campbeltown, she created 30 portraits. These large scale pencil drawings portray some of the men who worked at Argyll Colliery, including her father, Neil Nimmo. Two women were also portrayed: Agnes Rennie, who worked as head of catering at NCB (Scotland) in Alloa. Agnes was a regular visitor to Argyll Colliery. Agnes Stewart is also portrayed. Agnes sang her father, Willie Mitchell’s song, The Road to Drumleman, for the documentary.

As part of the exhibition, framed prints of the portraits, were given to the men and women or to their families, as some of the men, sadly, have died since the portraits were made.

More portraits and photos can be viewed here. 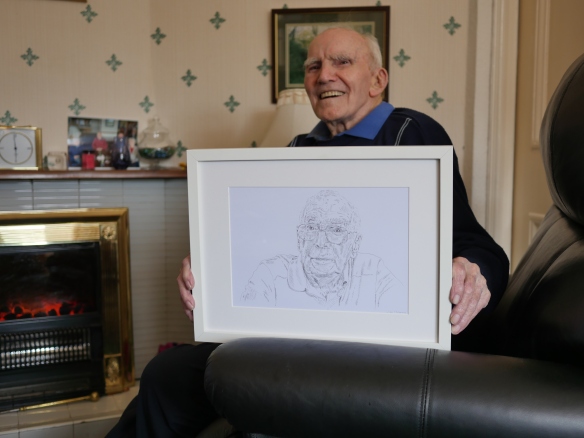 Francis McWhirter with a portrait of his late brother, Dennis, who once worked at Argyll Colliery Machrihanish. Photo: Jan Nimmo © 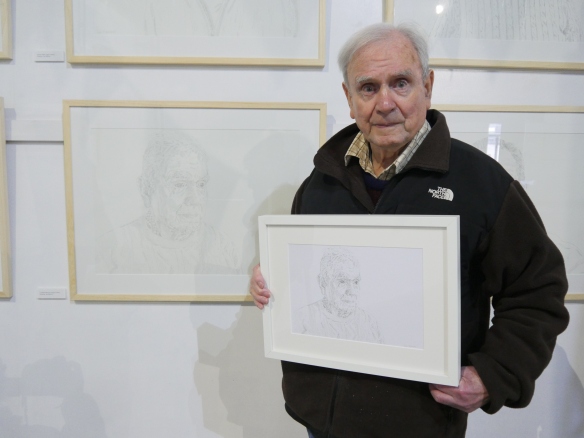 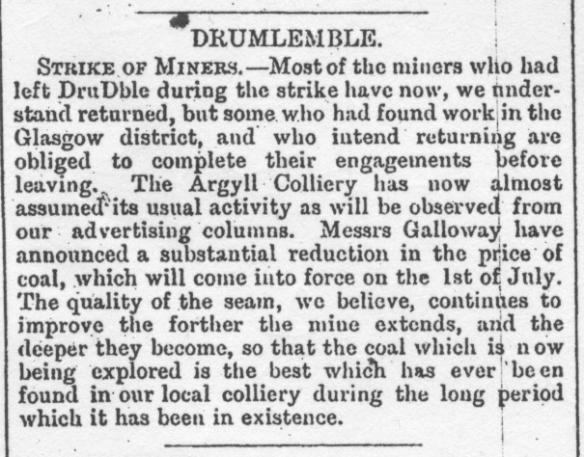 Extract from the Argyllshire Herald, Saturday 27th June 1885, reporting on the end of a strike at the mine at Drumlemble. Courtesy of Campbeltown Library and with thanks to Angus Martin.

The Road to Drumleman, an exhibition celebrating Kintyre’s coal Mining Heritage  was held at Glen Scotia Distillery in April 2017. This year is the 50th anniversary of Argyll Colliery, Kintyre’s last coal mine.

The exhibition was the gathering together of information and images, which started in October 2016 with drop-in sessions at Campbeltown Library. The information here on the archive/blog was digested into a slideshow of almost 400 slides which can be seen here as a PDF – it may take a wee while to load so please be patient.

The project took former miners and coal mining into locals schools and the result of these creative workshops with artist, Jan Nimmo, at Dalintober and Drumlemble primary schools was shown at the exhibition in the form of colourful mining-themed bunting which was reminiscent of Miners’ Gala Days in Kintyre. Campbeltown Grammar School also worked with Jan to recreate a trade union banner for Argyll Colliery which was also prominently displayed at the exhibition.

The final component to the exhibition was a series of large framed pencil drawings made by Jan Nimmo. Jan’s father, Neil, was a shot-firer at Argyll Colliery and it was he that inspired her to make the documentary The Road to Drumleman and to continue to explore Kintyre’s coal mining past through this current project with SKDT.

Part of the project was to give a framed print of the drawings to either the subjects or their families. You can view photos of the exhibition and some of those who attended here. 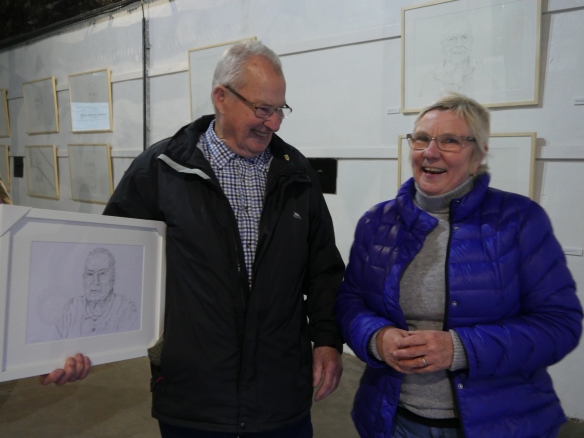 We would like to thank everyone who has supported to the project to date and to all of you who came along. A special thanks also to our hosts at Glen Scotia Distillery who worked hard to make the Kiln Room an excellent venue.

There is a forthcoming opportunity to view the trade union banner and the slideshow presentation, including the drawings, at Campbeltown Museum, who will set this up alongside a related display of their own artefacts. This will run from mid-May till the end of August.

The project will end with a community celebration/screening at the beginning of September at Machrihanish so look out for further information here on the blog or the Facebook page for details of that.

In the meantime we are still looking for any information, photos or stories you may have for the archive/blog so please feel free to contact us.

My father, Willie Mitchell, who was a painter, decorator and sign writer was employed by the N.C.B. as a painter and sign writer at Argyll Colliery. I believe it would be in the 1950s and 60s. The family joke, when he would tell us he was going down the pit, was that he was painting the coal black. My father left the pit when it closed in 1967 and went to work for the M.O.D. at RAF Machrihanish until he retired in 1972.

When the coal was being delivered to my mother, Agnes, she always had the delivery men in for a cup of tea; Alex Mason, Neil McIvor – the other person’s name escapes me.

At one point my father was asked to go to the Sailors Grave at Inneans Bay, to paint the cross and I remember him saying it had been a great day out and that he had been privileged. 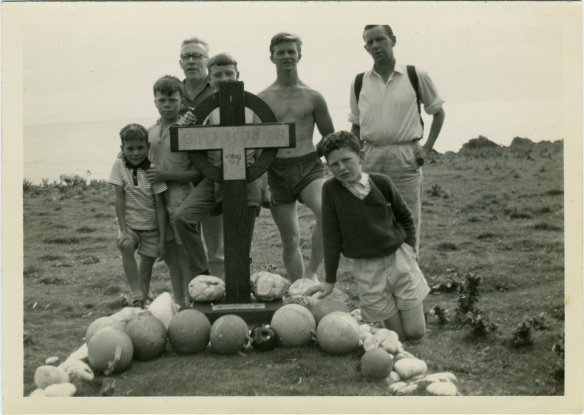 My brother, who was also called William Mitchell, was employed by the N.C.B. at Argyll Colliery from 1953 to 1956, when he left to join the RAF. While with the N.C.B. he attended various classes at Dungavel, in South Lanarkshire, gaining qualifications which were to his advantage.

I attended picnics and parties, all courtesy of the miners, and I was allowed to bring a friend along. It seems tame in comparison to things they do today but they were really wonderful days out for all who were involved.

James William Fowler (Jimmy) my father was born in Soberton in Hampshire on 22 April 1927. He was only son to Fred and Winnie Fowler and had an elder sister, Beryl.

At the age of 17 he left England bound for Scotland where he had enlisted himself to the Black Watch regiment and was based in Elgin, from there he was posted to Douglas (Lanark) where he met my mother, Grace Anderson and they married in 1948. My brother Eric was born in 1949 followed by me in 1958. 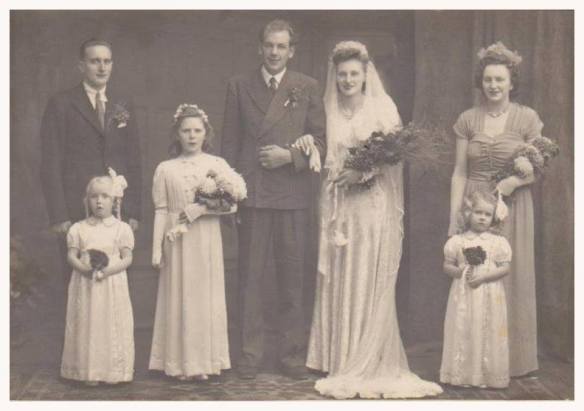 When he was demobbed, he turned his hand to mining along with my grandfather John MB Anderson and my uncle James McBride Anderson, and later in years my uncle David Gibb Anderson. I believe it was around 1950 that all the Anderson/Fowler families moved to Campbeltown where the three families lived at 97, 99 and 101 Ralston Road. The menfolk were all transferred to work in Argyll Colliery.

My earliest memory of my dad working in the mine was of him going out on the night shift as I was going to bed and on day shift coming home and us having cosy nights round the fire.

Dad with me as a baby in 1959. Photo courtesy of Elaine Haines ©

I did not know much about my father’s job as a child but I do remember all the fun we had going on miners picnics, the buses were alive with excited families all heading to Westport, Macharioch or Machrihanish beach. We had great fun together as a family and with all our mining family running races, swimming, watching the tug of war and lots more.

Myself and some of my cousins at miners picnic (if anyone has any idea where this was taken I would love to know). Photo courtesy of Elaine Haines ©

Dad was also in the Miners football team and played in goal. He often told us about the chance he had to become a Rangers FC player but he turned down the offer as he could make far more money working in the pit as he had a family to look after and there was no money to be made in football. Dad once mentioned that three of the men standing at the sides had died and he was the last one standing so by process of elimination, he was next. But he survived long after his friends had passed away. (Jimmy Fowler, second left).

Another memory I have is the drama group, NCB Players. My grandfather was producer, director and sometimes acted in the plays. My mother became a pretty good actress and won a few acting awards. I loved to go to the rehearsals in Broom Brae hall. The best part was going to Victoria Hall in February for the drama festival and watching everyone dress in character and have their makeup done. It was quite a transformation. One play which I fail to remember the name of, my mother played a witch and at the end of the scene the character my grandfather played, he stabbed her through the heart with a spear, the hall fell silent as she lay dying and I as a young child shouted out from the audience, “Grandad, you killed my mummy”. I don’t think I was very popular that night.

My dad was a member of the Miners Rescue Team and was very much in the fore front dealing with the big fire, he was given special permission to leave the mine to travel to Glasgow when my mother was giving birth to me. He also looked after the canaries that were a vital part of a miner’s working day and sadly he lost quite a few over the years. But glad to say they helped save many miners lives.

On the closure of the mine, dad was offered jobs in Corby and Sheffield. He deliberated long and hard over this and his deciding factor to stay in the town was when a young girl was murdered on Cannock Chase which was very near to where we would have been living.

He was a very proud English man but he was also a very proud adopted Scotsman and never returned to live over the border. He loved life in Campbeltown where he had made many life- long friends through mining, football, fishing and working on building sites in and around the West Coast and beyond. He took great pride in talking about the times he worked in the mine and was honoured when Jan Nimmo asked him to take part in the making of The Road to Drumleman and always had a tear in his eye as he reminisced. Sadly he never saw the completed documentary. He lived his life in Ralston Road, Campbeltown right up until he died in February 2008.

The Road to Drumleman
Blog at WordPress.com.