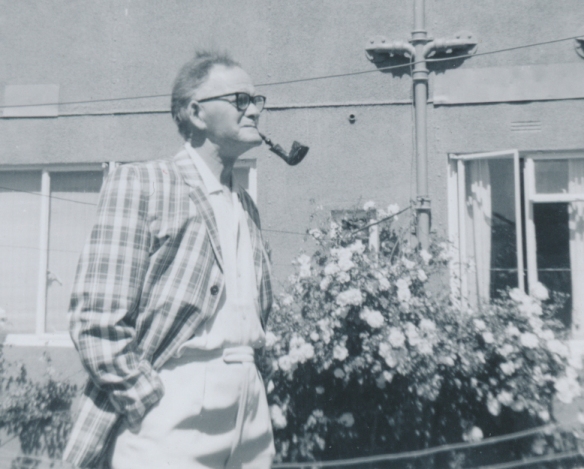 J.O.L. Henderson, my Dad, was known as Jack to everyone. He was born on the 30th June 1905 in Shotts, Lanarkshire. Shotts was a mining community and he worked in coal mines all over Lanarkshire, only moving to Campbeltown around 1952 with his new wife, Mima, to a new, cleaner life at the foot of Bengullion and a new job as baths manager at Argyll Colliery, Machrihanish.

Kay, that’s me, was born in 1954 and so I was not part of his industrial past in Shotts, yet he was incredibly proud of his heritage. He made many friends in the town, both through work and his many other interests. His lifelong knowledge of first aid meant he was part of many mine rescue teams and first aid attendant at Machrihanish.

Here is Jack with  John McCaig, friend and work colleague. 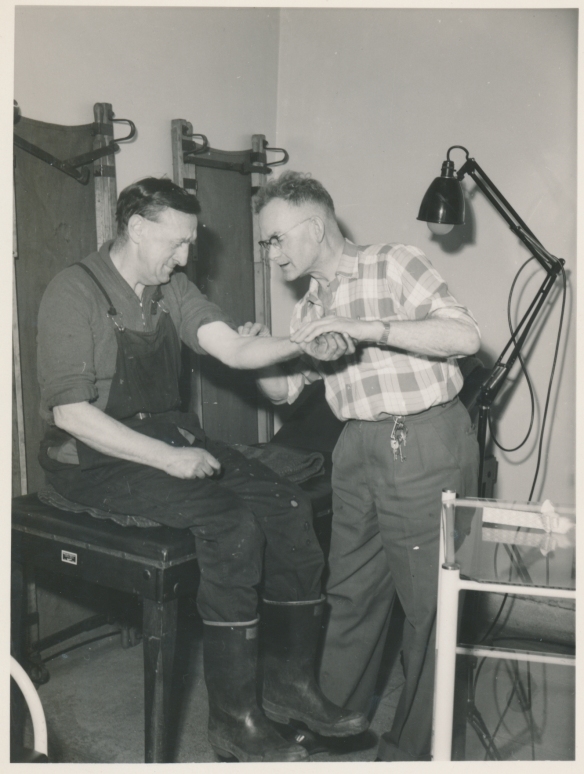 Jack was a musician, playing bagpipes since the age of 9 and was with his brothers in the world famous Shotts and Dykehead Pipe Band. In Campbeltown he continued to play and write tunes, often, in the summer months, playing for the crowds coming off the “steamer” at the Quay.

I’m sure this helped him to survive a few more years as he suffered from the lung disease, pneumoconiosis, as many miners did. He maintained that piping was good for his health when my mum asked him to “pipe down a bit!”

Jack’s love of amateur dramatics was also driven by his mining life, as dramatic groups in mining towns were prolific all over Scotland. As actor, stage manager and producer he was thoroughly involved with the Argyll Miners’ Welfare Drama Group from 1954 until the colliery closed in 1967.

There were many people involved in the production of plays over the years; names I recall include John M.B. Anderson, Bobby Martin, John McCaig, Ian McKinven, Grace Fowler, Beryl McInness and Annie Hamilton Many others were involved including my Mum occasionally as prompter or setting stage.

I loved watching from the side at rehearsals and longed to be involved, which I did later. As part of the Scottish Community Drama Association the group competed in many drama festivals, often with great success and going on to higher levels at the festival.

One part of mining life that involved children was the annual Gala Day. Most of the miners’ children had a day out to the shore or countryside on a bus, with games, sports, treats of ice cream and sweets, fun in the fresh air. I think it was in June, but just remember the sunshine and lots of noise and running around. 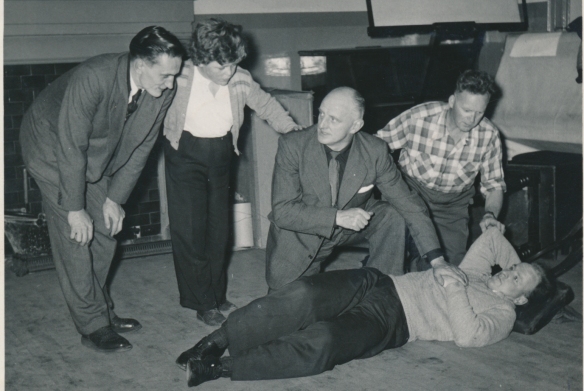 The coal miner’s life was one of the hardest I can imagine, yet produced many strong and proud men. My Dad was still at the “pit” when it closed but took early retirement rather than move to Cumnock or further afield.

He spent his last working years at the airport, still Machrihanish.

One of my clearest memories is of looking out the bedroom window on dark mornings to see my Dad, lit up by the streetlamp, giving me a wave before he boarded the bus for work at the colliery.

He loved life and lived it to the full. Campbeltown and Machrihanish were where he chose to be.