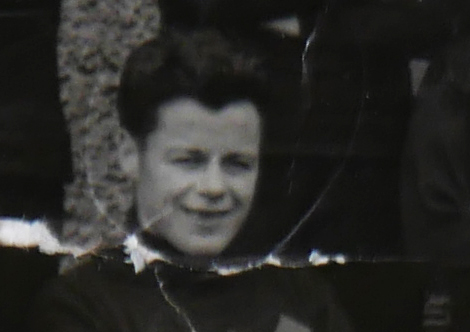 John Anderson, Kynamp worked at Argyll Colliery till it closed at the end of March 1967. Photo courtesy of Rena Anderson ©

John Anderson, also know by his nickname, Kynamp, was born in the Kirk Close, (which runs along the side of the Lorne and Lowland Church, off Long Row), Campbeltown, on 14th February 1933. One of  family of 13, he was brought up in Park Square by his parents, John Anderson and Marion (née McGeachy).

John’s daughter, Mari, who was named after her grandmother, says, “Dad’s nickname was Kynamp – we don’t know how it came about but his uncle, Paddy Anderson from Dublin, was called Kynamp and Dad just seemed to inherit the name”.

When John left school he did various labouring jobs in Campbeltown before he started work at Argyll Colliery around 1955. He was trained at the NCB’s Residential Training Centre Dungavel, South Lanarkshire. Dungavel was once the hunting lodge of the Dukes of Hamilton and was sold on to the National Coal Board in 1947. John returned to Campbeltown and continued his work at Argyll Colliery.

He met a Southend woman, Mary MacMillan, who everyone knows as Rena. She was the daughter of George and Mary MacMillan. At that time Rena was working as a waitress in locals hotels (The Ardsheil, The Argyll Arms and the Royal). John and she first met at a dance in the Victoria Hall in Campbeltown.

The couple married in April 1956. By May the same year they had been allocated a miners’ house in Davaar Avenue. They first lived at number 35 before moving to number 43. Amongst their mining neighbours were the McCaigs, the Wests, George McMillan, the Nimmo’s, Gus McDonald, the Brodies, the Armstrongs, Feenie (Charlie Farmer) and Braemar Charlie; Charlie Smith. Rena still lives in Davaar Avenue.

John and Rena had a family of three, Georgia (named after her maternal grandfather), Mari and Shaun. John worked at the mine as a face worker until it closed on the 27th March 1967. John loved working there and he and his late daughter, Georgia, enjoyed sharing his stories from his time working there. In a interview for the film, The Road to Drumleman he said,

“I would’na have changed it for anything. If it had’nae tae have closed I’d have still been in it till I retired, you know, and when I left the mine I did’na know hoot tae dae on the surface”. 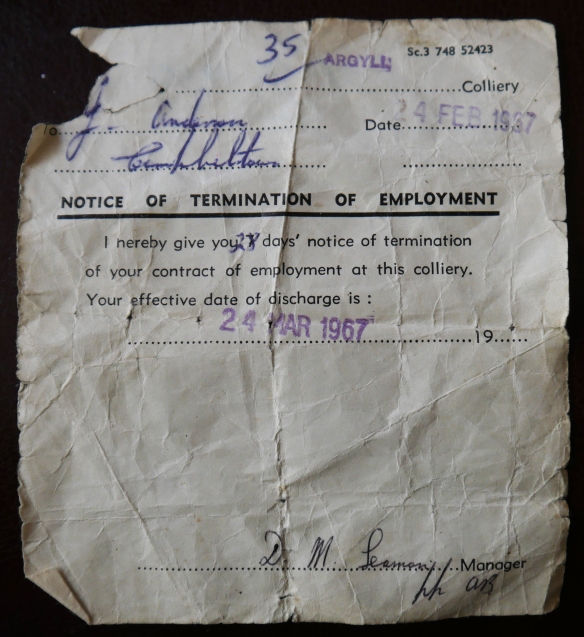 Note of Termination of Employment from Argyll Colliery signed by Mr Seaman, the manager at the time of the closure. Courtesy of Rena Anderson.

After the mine closed John worked as a labourer for various contractors in Campbeltown but his job at the mine was the one where he was at his happiest. He kept his union book, his training photo and his notice of termination of employment. He also kept something that he found down in the mine… he wasn’t sure what it was; a fossil maybe? – a curiosity, something reminiscent of an Aztec bird carved from pyrites’s – what ever it is, it remains with the family as a keepsake of John’s time working underground.

One of John Anderson’s keepsakes of Argyll Colliery where he worked underground. No one is quite sure what it is but it’s clear that it’s birdlike form caught John’s imagination as it it’s still with the family. Courtesy of Rena Anderson. Photo: Jan Nimmo ©

John Anderson Kyyamp. Video still from The Road to Drumleman.

Mari again, “My brother Shaun has 5 children 3 boys and 2 girls and called his youngest who was born on the 15th April, Georgia, for my late sister, so that’s lovely… I have one son Campbell who is an electrician and has his own business, CR Electrical. He has a son, Josh, who is 5. Campbell enjoyed listening to all the stories my Dad told him about the mine and both were extremely close. Campbell misses my Dad”.

John’s daughter, Mari, with a photo of her father. Photo: Jan Nimmo ©

Thanks to Campbeltown Heritage Centre for allowing us to publish images of mining memorabilia that has been handed into the centre by local families, including former shotfirer at Argyll Colliery, John Kerr, Campbeltown and Donald Irwin, Drumlemble, son of John Irwin, also a shotfirer. To see the collection and visit C.H.C. visit their website for opening times. National Coal Board Travel Permit – Argyll Colliery, 1963. Travel Company: McConnachie (this was the company that transported miners by bus from Campbeltown to Machrihanish). Courtesy of Campbeltown Heritage Centre. 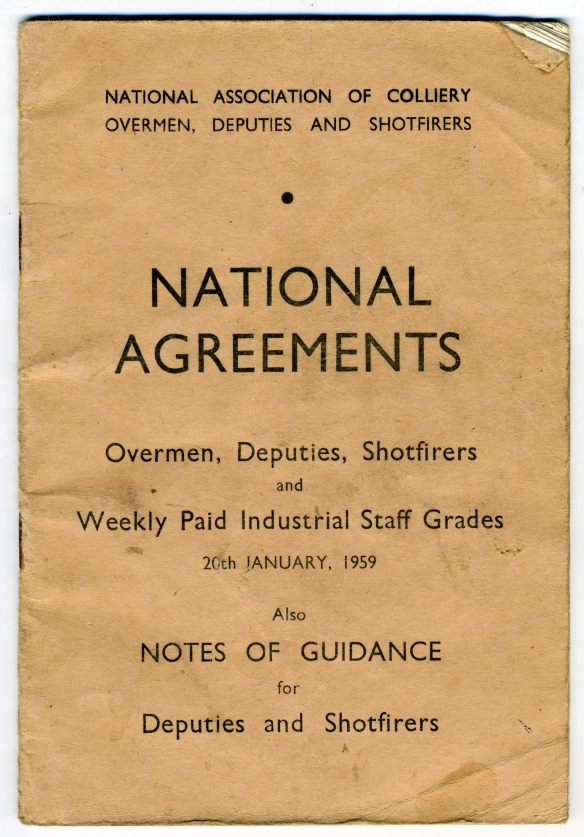 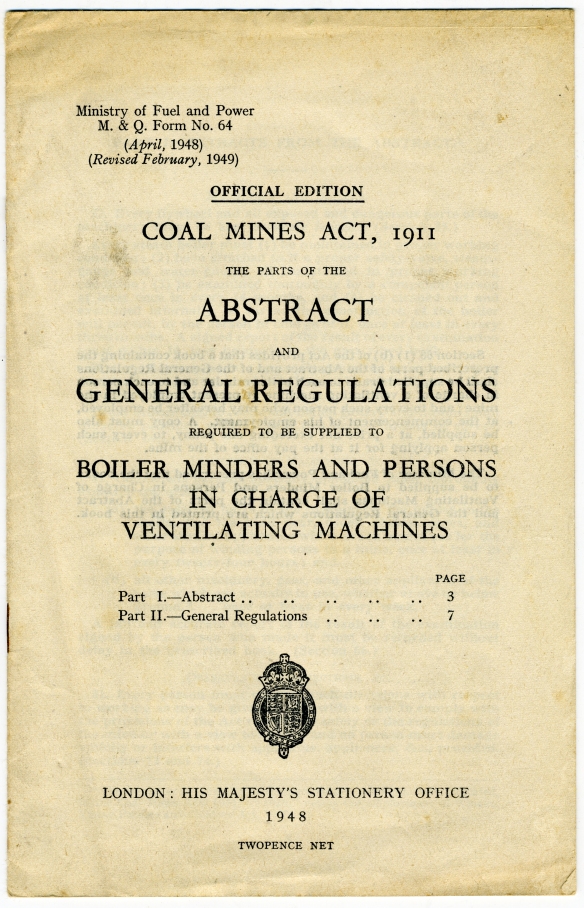 Coal Mines Act 1911 – the parts of the Abstract and General Regulations for Boiler Minders and Persons in charge of Ventilating Machines (Reprinted in 1949). Courtesy of Campbeltown Heritage Centre,

The following images can be viewed at Campbeltown Heritage Centre – for full details visit their website here. Many thanks to C.H.C. for allowing us to publish these images on the TRTD blog. 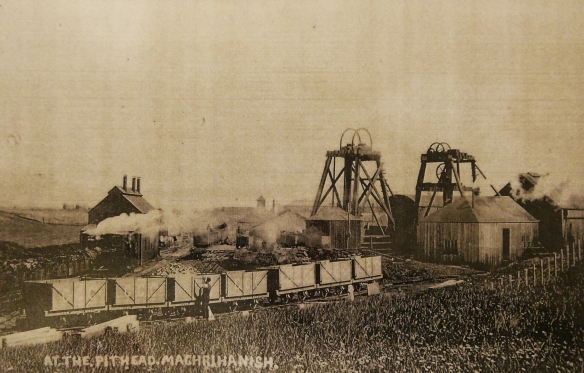 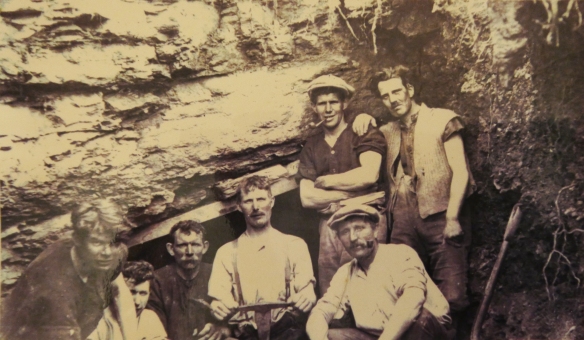 This could be you! Issued by the Ministry of Labour, National Service and the National Coal Board. Published in the Campbeltown Courier, 31st January 1952. From the Campbeltown Library collection.

Many thanks to the staff of Campbeltown Library.

Here are some more photos Kenny McMillan’s photographic collection. Kenny worked at Argyll Colliery from 1947 until the mine closed in 1967. There are a couple that need some names putting to faces so we’d really appreciate you help. Following on from Angus Martin’s article about Inneans Bay it’s especially nice to see the photo below of a visit to the Sailor’s Grave. It’s also good to see some images from the gala days beginning to surface at last.

Miners’ Gala Day 1965. Kenny McMillan and Peter McCallum and on the bus, at the front Kenny’s sons Malcolm and Kenneth. The photograph was taken at the Esplanade, Campbeltown. Photo courtesy of the McMillan family.

Kenny McMillan and two other colleagues underground at Argyll Colliery, Machrihanish. If you can identify the other two men, please get in touch. Here we can see the height of the roads at the mine – the seams of coal were 8-10 feet deep in places. Photo courtesy of the McMillan family. 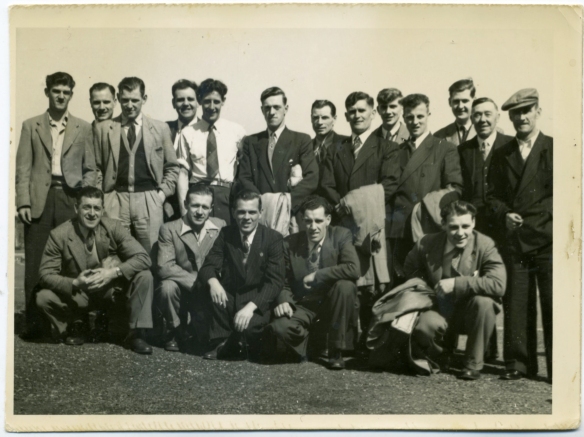 On the 15th of November 2016 myself and former collier, Willie McMillan, and I paid a visit to Drumlemble Primary School as part of SKDT’s The Road to Drumleman project. Willie, a Drumlemble born man, remembered going to the previous Drumlemble School which was situated in Coalhill, which was originally a separate parish from Drumlemble. The school that Willie attended educated the children of the village between 1857 and 1975. 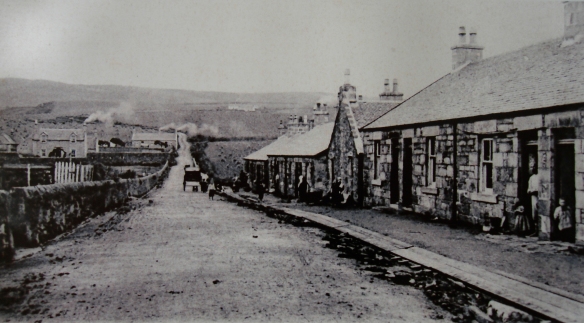 The postcard above of Drumlemble and Coalhill shows the three schools which once existed in the village: on the left, the State School, just behind the two storey building, and up on the hill, just left of centre we can see the Free Church School which was attended by the sons of tenant farmers. The third school, the Colliers’ School, also known as the “Slate School” is the building with the pointed gable amongst the miners’ houses on the right-hand side. Our visit was to the current school which is situated at Dalivaddy, east of Drumlemble, on the on the road between Campbeltown and Machrihanish. We will be posting another article about how the school came to be there in the course of the project.

AWillie talked to all the school pupils (28) about his life as a miner and we showed the children a slideshow of images related to Argyll Colliery, Machrihanish, and mining. The children were also able to handle mining artefacts, such as helmets lamps and batteries, from Campbeltown Heritage Centre. The children were very attentive and had lots of questions for Willie. Some of the children were especially interested when they heard that explosives were used to blast the coalface!

Willie McMillan, former Argyll Colliery worker talking to the children at Drumlemble Primary School. Here Willie is showing the pupils the pick that he used more than 50 years before. Photo: Jan Nimmo ©

Willie McMillan, former Argyll Colliery worker, brought in the knee pads he wore to work underground when he was at the coalface. Photo: Jan Nimmo ©

Willie McMillan, former Argyll Colliery worker telling the children at Drumlemble Primary School about how he had an accident down the mine and how his hand was so badly damaged that he was off work for 3 months. Photo: Jan Nimmo ©

The children at Drumlemble Primary School were able to handle some mining artefacts which former miner, Willie McMillan, had brought in as well as some objects from Campbeltown Heritage Centre. Photo: Jan Nimmo ©

After Willie’s talk, I showed the class some images of tools and other objects associated with mining and the children and I worked along with the teachers to help the children draw some images to make templates which they then used to make fabric collages. These were applied to “Miners’ Gala Day” bunting which will be a part of The Road to Drumleman Community Exhibition in April 2017. 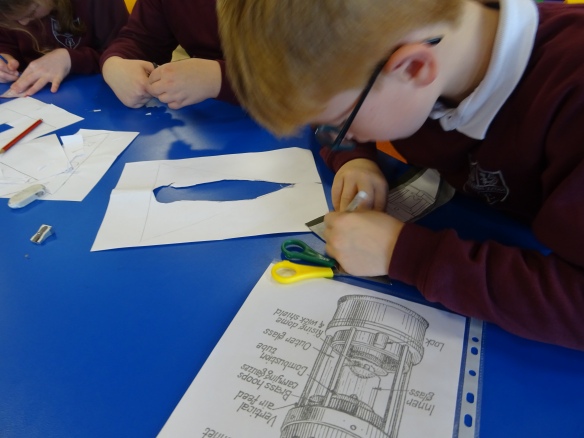 Some excellent research and drawings into coal mining done by the children at Drumlemble Primary School with their class teacher. Photo: Jan Nimmo ©

The children  had already done a lot of excellent research with their teachers into coalmining in the area and what it would have been like to work in some of the older mines near Drumlemble, the history of the coal canal and the salt pans at Machrihanish – but they learned some new things from listening to Willie’s personal stories.

Detail of mining themed bunting made by pupils at Drumlemble Primary School – a “piece” box, a miner’s token and a spade. Photo: Jan Nimmo ©

The miners kept their sandwiches in “piece” boxes.

Detail of mining themed bunting made by the pupils at Drumlemble Primary School – a hammer, miner’s helmet with battery and lamp and a water bottle. Photo: Jan Nimmo ©

The miners used batteries for their helmets.

They brought birds down the mine to warn about gas. If there was gas it would fall off its perch.

Detail of mining themed bunting made by the pupils of Drumlemble Primary School – Canaries in cages. Photo: Jan Nimmo ©

The shotfirers made holes in the coal for the explosives.

They used dynamite to blast tunnels. 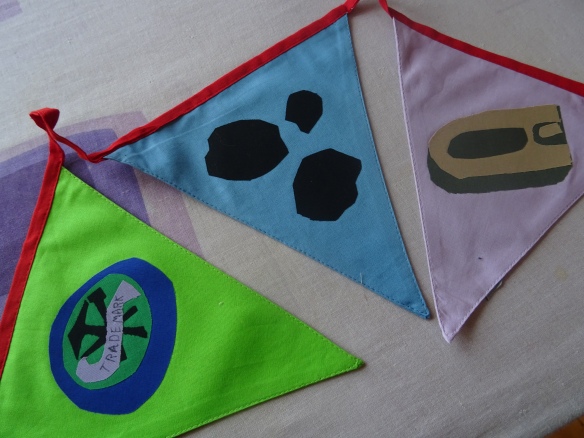 The pupils at Drumlemble Primary school with their mining themed bunting with artist, Jan Nimmo, and the staff at the school. Photo: Jan Nimmo ©

Every pupil at the school contributed an image to the 5 metres of bunting  produced – each flag with a different mining image. It was a busy but successful day.

I’d like to thank Willie for giving us all a first-hand insight into life at the colliery. Thanks also to all the teachers and other staff at Drumlemble Primary School for all their help and for letting us bring the project to them – and of course, many thanks to the children who worked very hard to produce some lovely work! A few weeks after his visit to the school, Willie was delighted to receive some letters from the pupils. I think it fair to say that he was “in great order”.

Here is a selection of the letters from the children.

The Road to Drumleman
Create a free website or blog at WordPress.com.